The Journey to a New Me Begins Today!

The Dude, Epilepsy, and a Proud Mom

2 Easy Mother’s Day Crafts (That You Can Do At the Same Time!)

Aka Why We Held Our Son Back …& Why It Was The Right Decision For Him.

On the second last day of first grade on June 12, 2014, my oldest son received and brought home the below letter. The purpose of the letter is to have a current second grader write to a current first grader to help the first grader get excited about moving up to the next grade.

I read the letter with a smile on my face, then got a little misty-eyed as I read the signature. Why? Because the little boy who wrote the letter was my little Dude’s best friend in first grade – the first time around – in 2013. 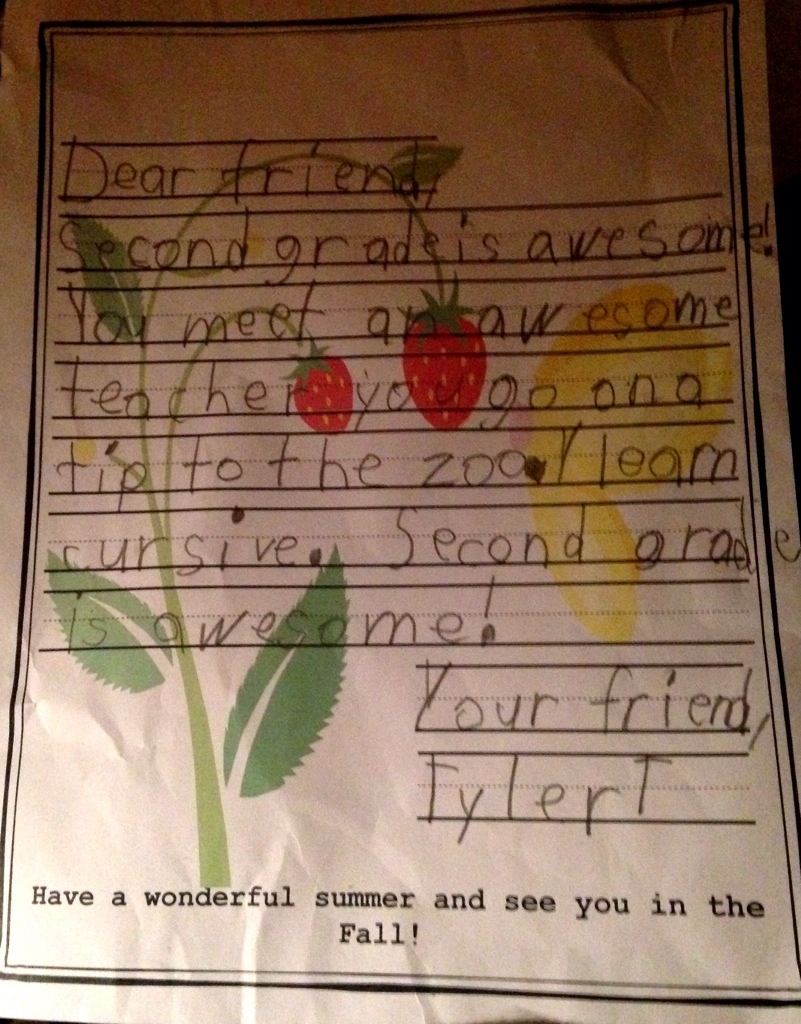 Let me start at the beginning…

As I’ve covered before on this blog, my oldest son, aka the Dude, has epilepsy. He was diagnosed at four years old. As a result of both the disease and the toxic anti-convulsant pharmaceuticals needed to control it, the little Dude has a host of side effects, including learning disabilities and some behavioral issues, i.e. diagnosed ADHD.

He’s truly the greatest, most compassionate, most creative kid ever, but he’s had his share of challenges to face at a very young age. Luckily for us, he understands his issues and faces his problems head-on. He’s quite amazing and we couldn’t be prouder.

But, we all know he has to work harder than other kids just to keep up in a lot of areas. Right around the time his seizures were diagnosed as epilepsy, when he was in preschool/Pre-K, we had the Dude in extensive, early speech therapy.

We decided to send him to kindergarten at age 5, even though he is at the younger end of the age range, with a June 21 birthday. We felt the right decision was to continue constant intervention for his speech and academics instead of holding him back until age 6 for kindergarten. So, off to school he went!

Kindergarten actually went pretty typically. He was considered a little on the immature side for the class and continued early speech therapy, but it was mostly fun and games.

First grade turned out to be a different story.

Here is the little Dude on the first day of first grade. The first time. 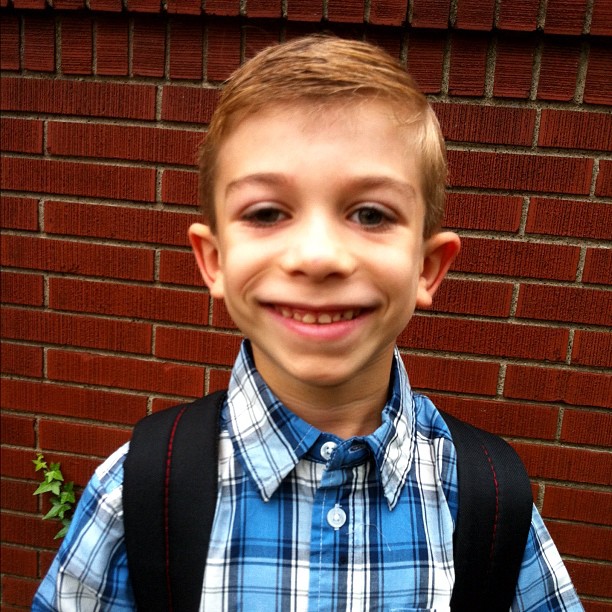 Quick pause. How cute is this kid?!

Ok, back to the topic… We noticed right away that the Dude was having learning and behavioral difficulties in his first grade classroom for the 2012-13 school year. He was quickly tested, evaluated, and diagnosed with ADHD and learning disabilities in both math & reading. He spent half his day in the special needs classroom, multiple hours a week with the speech and reading specialists and we continued extensive at-home intervention with him as well, knowing that a parent is a child’s most important teacher.

We continued to evaluate his performance using the typical IEP (Individualized Education Plan) process. We set goals and watched as he struggled and worked, but did not meet the goals set. At the end of each semester, we met with his first grade classroom teacher, his special needs teacher, his school psychologist, his principal, his speech specialist, and his reading specialist. Our child had an ARMY of amazing educators rallying around him, training him, but all of our combined efforts were not enough.

{His principal, seriously, IS the best and brings lots of expertise to the table. Although, we got a huge kick out of his portrayal of her in his “First Grade Memories” workbook.} 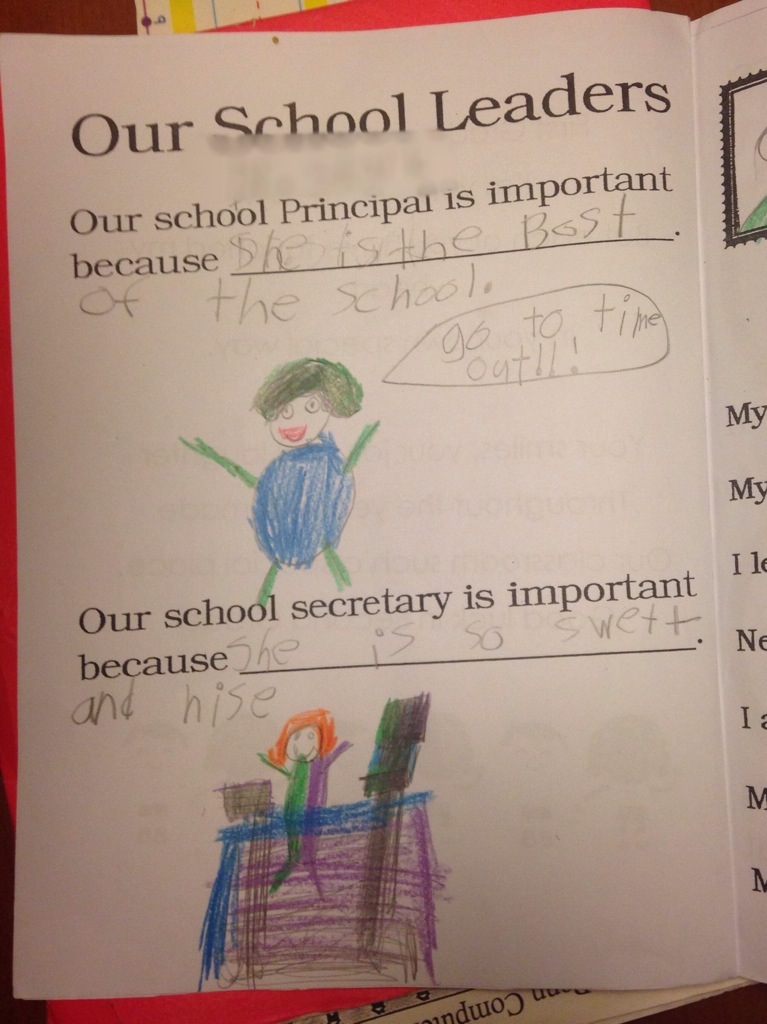 About halfway through the year, in our IEP meeting, I asked the hard question, “At what point do you begin to evaluate whether he can progress to second grade or needs to be held back?”

They seemed relieved that I brought up that question. They looked at each other and someone at the table began to say that they have already had a lively discussion on the subject and there were split opinions at the table. The principal was a firm believer in keeping children with their grade level as much as possible, believing in the ability for students’ to catch up with continued intensive therapy and also citing the social consequences of the decision. Everyone else at the table said that if ever there was a candidate to stay back at this age, it was the Dude. Everyone presented very valid and logical points of view, but the team mentioned that there are robust evaluations done to determine recommendations on being held back a grade.

We agreed the plan was to continue with the IEP plan, begin evaluations, and continue to discuss his performance at each meeting.

So, each IEP meeting, we discussed his performance. And, the table majority consensus continued to be that our son would benefit from being held back. We talked about it for months. Our son is very sensitive and the consequences of leaving his friends behind at the end of the year was a big one for us to consider.

At a later meeting in the year, the team made the official recommendation to hold Marcus back. There was testing, a scale for evaluation, interviews with the psychologist, teachers, therapists, and us, the parents, conducted and evaluated to come to the recommendation. The principal again expressed her hesitance, but agreed that Marcus fit the profile more than any child she had ever evaluated and so she agreed with the group’s decision.

But, ultimately, the decision came down to us.

WE had to decide and sign off on whether to agree with the group’s recommendation and hold our child back a grade, or give him another year and another opportunity to try to work hard and prove himself.

We had about a month to think. We thought and we talked. We made up our minds. We changed them. We argued (although not much, thankfully). We seemed to see pretty eye-to-eye on the decision. Ultimately, the unanimous, majority recommendation from educators we knew and trusted was the one we decided to follow.

We would be holding the Dude back for a second year of first grade. Here he is on the first day of first grade, the second time (still smiling)! 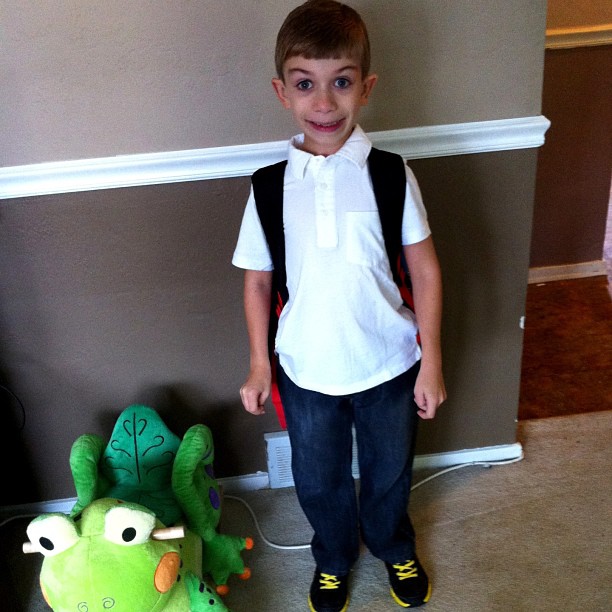 It is now the end of the year and my husband and I spent a little time looking back on the year in hindsight. We remembered his first grade teacher and the rest of his educator army immediately exclaiming about the great strides he made from the beginning of the year. We remembered him doing so well that he got pulled out of the special needs classroom completely and put back into the main first grade classroom for everything except short speech therapy twice a week. We remembered the goals hit at every IEP, the 100% spelling tests, the chapter books and long words read, and the many friends made. 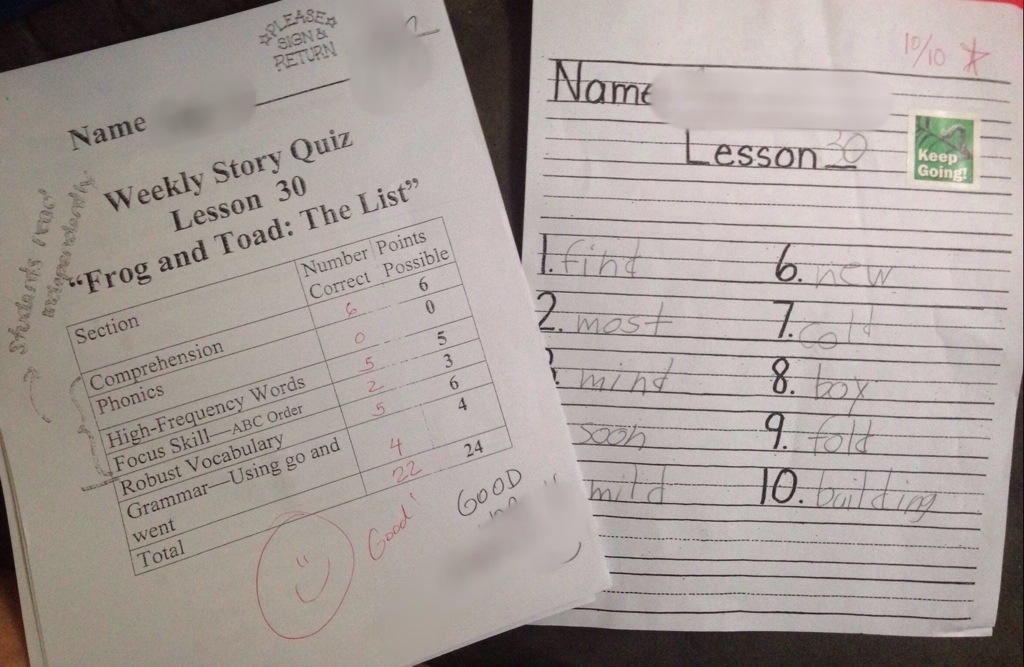 And, we agreed we made the best decision and gave the little Dude the gift of time. We know it won’t be an easy path for him. But, we know it will be a better one because of the decision we made. I welcome any parent who is facing the same decision to reach out to me with any questions on our situation. Each situation is unique and this may not be the answer for everyone having similar discussions, but I hope my experience can help other parents.

And, we close our story with the little Dude today, on the last day of first grade. For the final time. 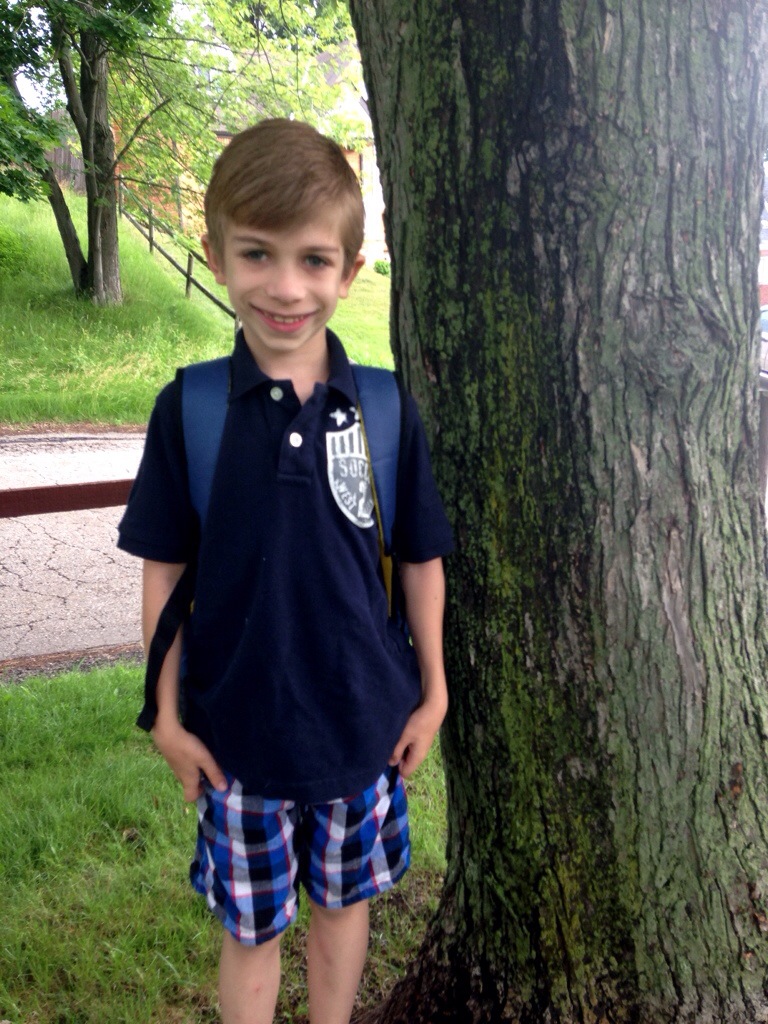 I am so proud of my little second grader.

PS: Happy summer to all educators and students out there!

3 Comments so far. Feel free to join this conversation.