The Journey to a New Me Begins Today!

How To Find Your Dream Job by Following Intuition

I woke up to a THUMP and a choking sound – and I ran like hell to my 7 year old’s room, because I knew exactly what that sound meant. He had fallen out of bed and was having a seizure.

It looked to be a really bad one (but, of course, they all look that way to his Mom).

The Dude and Epilepsy

Over three years ago, when he was 4, the Dude started seizing at night. At first, we didn’t know what the heck was going on. Plus, his seizures only occurred while sleeping, so we don’t know that we quite caught the full extent of the problem – at first. Then, we figured out what was happening pretty quickly.

We took him to the doctor, then the neurologist, and after his EEG, he was diagnosed as having benign rolandic epilepsy. His brain only “misfires” when he is asleep so that is why he only has nighttime seizures. Some children can grow out of this, while others have it for the rest of their lives. We won’t know what will happen with our son until that day comes (or doesn’t come).

The good news is that it could be much worse. He can live a productive, functioning life, which is actually difficult for many epileptics with worse diagnoses. And, I’m sure he will become stronger for having to deal with this in the end. That said, my heart goes out to any parent with an epileptic or sick child, no matter the severity of the diagnosis, it is the only time you feel truly helpless…

After the Dude’s diagnosis, it was determined he would have to begin taking an anti-convulsant medicine to stop the seizures. That is your one and only goal for epilepsy treatment.

Unfortunately, I sometimes wonder if the medicine is just as bad! The side effects are terrible, since the medicine effects the brain. The medicine causes learning disabilities/issues, behavioral issues and more. Some of the side effects include reduced cognition, drowsiness, dizziness, attention deficit disorders, and even depression, violence, and suicidal thoughts in children. It’s terrifying stuff*.

Since his diagnosis and once he began school, Marcus has struggled with both learning and behavioral disorders (primarily ACHD). We had to make the tough decision last year to hold him back in first grade due to some of these issues (more on that later, but, luckily, it’s been a great decision for him academically and socially).

The first medicine we tried, Trileptal, did not stop the seizures, even with multiple dosage increases. We transitioned to a new medicine, Keppra, which started working and has kept him pretty much seizure free for almost a year and a half – until today.

So, back to this morning. I was sitting there on the floor, cuddling my seizing seven year old and praying for it to stop. When the seizure didn’t show signs of stopping, we called the ambulance. It was the first time we had to do that; it was that scary. Luckily, the seizure started winding down and he was “coming out of it” by the time the paramedics came.

By the way… a not so Sterling moment may have been sitting in the floor in a Tshirt and underwear, cuddling my 7 year old, while debriefing with the paramedics. But, I could have honestly cared less.

The worst part about the post-seizure time period is watching the Dude try to recover. At first, he lays there totally limp, eyes wide open – and it’s the scariest moment of my life every time because I fear the worst – that he won’t “come out” this time… That there is permanent danger, etc. It’s completely unlikely, but I think about it every time. And bawl my eyes out (as secretly as possible… Gotta try to stay strong…).

Then, he slowly begins to recover. It takes about 20-30 minutes for him to regain speech and movement (he’s essentially paralyzed immediately after a seizure).

Today, it took an extra long time. He’s typically back with it pretty quickly, although is very tired and needs a nap. Today, he napped right after for a short time, but woke up a little disoriented, nauseous and complaining of a headache. Time for internal Mom panic.

At this point, it’s time for work and I’m a bundle of nerves. This is definitely one of the downsides of being a working Mom. I decided family comes first today, so took an emergency PTO day. Which means more stress later as I try to catch up. But, that’s life.

At this point, we’re waiting to hear back from the doctor. And, for some reason, the neurologist is always the slowest doctor to call us back (they never answer the line and we always have to leave multiple messages). We weren’t sure if we should worry or if being sick like this was typical, since it wasn’t typical in the past for us.

He fell back asleep and the pediatrician called and spoke with us for a while, saying they believed this was normal as long as he continues to get better. So, I relaxed, very slightly.

Flash forward another nap (much of which I posted vigil in his room, I’m such a worrier) and (Thank God), the Dude woke up feeling better. 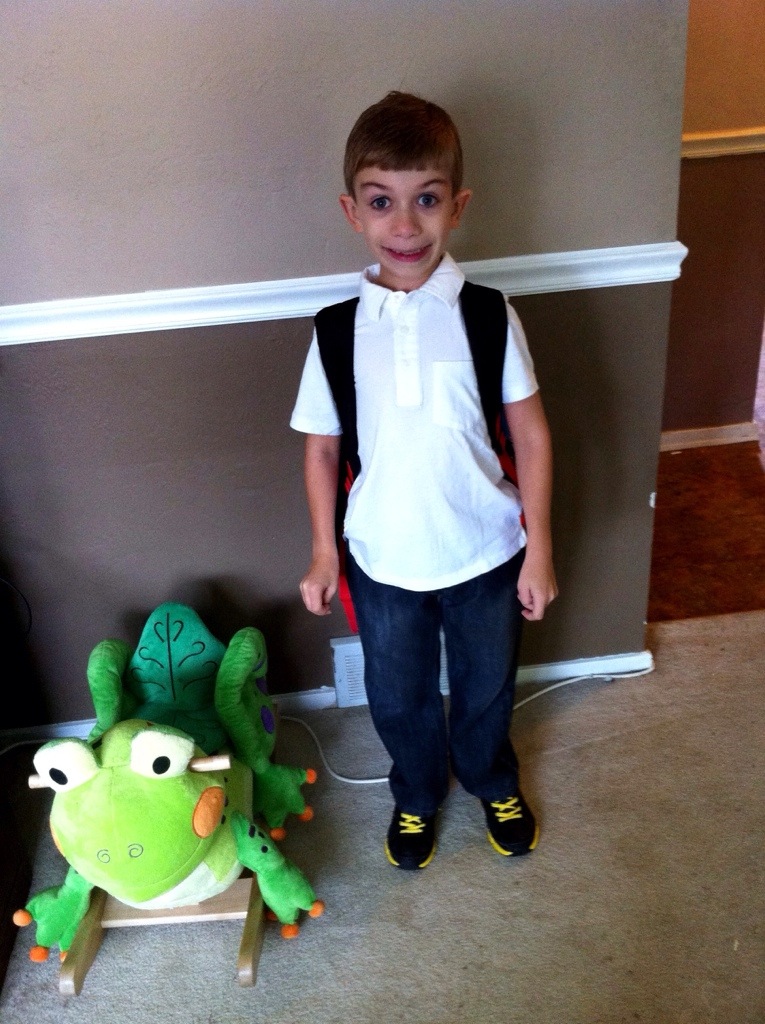 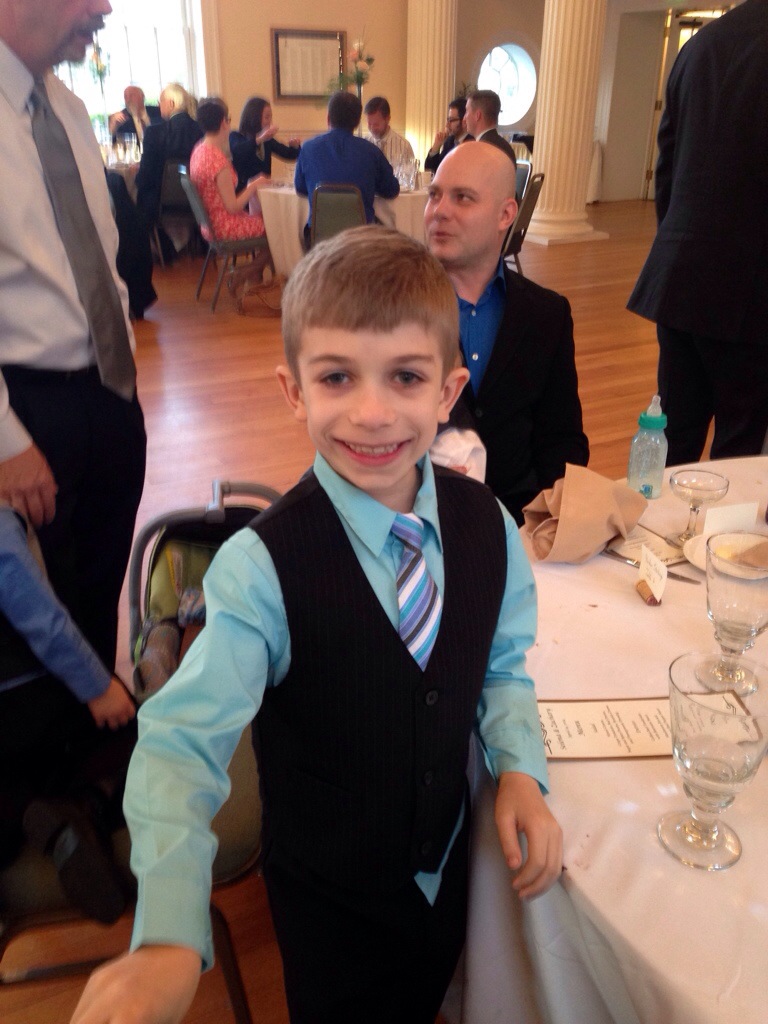 What amazes me is the resilience and strength that such a young child can show.

After his long morning, we decided the little Dude deserved a trip to the treasure chest, our behavioral reward system for the boys. There was one Skylanders action figure and he was very excited to be able to get it.

He was SO happy with the gift that he exclaimed, “This is the best day ever!
I’m so happy!”

After all he had been through, a small gift cheered him up so much that he was back on track to the best day ever. What a great kid.

Epilepsy doesn’t stop him. He loves school, plays sports, he just ran the Pittsburgh Kid’s Marathon, takes music lessons, can play video games (his brain does not respond negatively to light or sound seizure triggers, only sleep) and has no restrictions on his life. We’re blessed.

The other thing that happened this morning that made me so proud was how our two (almost three) year old handled the situation. He shares a room with his brother and, in the chaos of the seizure, wasn’t properly removed from the situation (completely my bad, in hindsight). But, he stayed calm, comforted Marcus during his recovery, and later had a long talk with me that showed he grasped the situation and could be of help to us in the future to notify us if the Dude falls out of bed or has a seizure. I’m impressed to have seen both my very young children stay calm and compassionate in the face of a crisis.

At this time, we’re still waiting for the neurologist to return our multiple calls (we’ve spoken with the nurse once now). The expectation is that we will, once again, increase his medicine dosage and hope to go another long stretch seizure-free.

Thankfully, I know my little dude is tough and can handle it. The question is – can I?!

Epilepsy awareness is important, because we need a better understanding of the disease, more research, and better treatment methods. There are many treatment options and, lately, there has been breaking research on the benefits of cannabinoid use that is worth discussing and supporting. I pray our knowledge of this terrifying disease and it’s treatment advances in the future.

I keep up with the Epilepsy Foundation as a great source of epilepsy awareness and do what I can to bring attention to supporting events, research, and issues, some of which I will feature on this site.

5 Comments so far. Feel free to join this conversation.